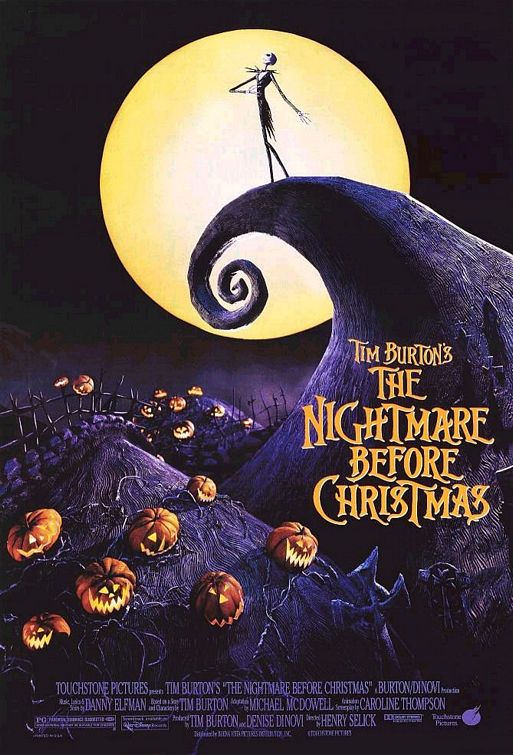 Ryan began his love of Disney at a young age, when he went to EPCOT Center the week it opened. His picture showed up in Southern Living Magazine from that trip, and he was hooked. Ryan began his love of Disney films when he attended a showing of The Lion King with his wife, Sally. From there, he went back and began watching all the Disney movies. Since then he’s taken on the challenge of watching all of the Disney shorts and films in order, over on DisneyFilmProject.com. Since then, the site has expanded to the weekly Disney Film Project Podcast and Tweetwatches! Ryan lives in Atlanta, GA with his wife and two kids, and makes frequent trips to Walt Disney World for fun and frivolity.

When you think about The Nightmare Before Christmas, you think of wild, goth-themed imagery and Halloween characters.  There’s much more to Nightmare than that, though.  Tim Burton has created a movie full of meaning with remarkable depth.  It’s not just crazy images, rather there is a true, meaningful story behind the amazing images.

In case you’ve not seen it, you should.  But the story is rather simple: Jack Skellington, the king of Halloween Town, becomes enamored with Christmas after stumbling into Christmas Town.  He makes the rash decision that he can do Christmas this year, going so far as to kidnap Santa Claus to give him a “vacation.”  However, it turns out a Christmas done by Halloween ghouls is not a particularly appealing one, and Jack realizes his mistake and goes back to being the Pumpkin King of Halloween.

Tim Burton chose stop motion animation as his medium.  Since Nightmare is really a Christmas special in reverse, Burton paid tribute to classics like Rudolph the Red-Nosed Reindeer by doing his movie in stop motion.  The fact that the characters are able to emote so well and create such fluid performances is a tribute to the skills of the animators.

The plot is a different one because it’s not driven by an external conflict.  No, Nightmare is a character piece, where all the events of the film are driven by Jack Skellington’s decisions.  There is no external conflict, only Jack’s dissatisfaction with his lot in life.  Jack is driven by the need to get out and discover more in the world, much like we all are.  It makes Jack a sympathetic character.

Because Jack is someone we can relate to, Nightmare is not only an excellent film, but also a layered one.  My children watch the movie and laugh at the visuals of Halloween invading Christmas, but I watch it and see a man striving to break out of his shell to try something new.  It’s a film that can deliver different meanings to different people.

Any discussion of this movie would be incomplete without talking about the brilliant songs by Danny Elfman.  During the creation of the movie, Elfman would meet with Tim Burton and get snippets of the story then create the songs.  This collaboration occurred before a script was ever created, and the songs really propel the story forward.  They are catchy and fun, and they set the mood extremely well for each piece of the film.

Also, Burton’s imagery can’t be overlooked.  The visuals of the film were designed by Burton when he was still at Disney, and they were updated by director Henry Selick.  The collaboration produced something unique that, honestly, has not been replicated since.   Burton has tried–in films like The Corpse Bride–but has not succeeded.  Nightmare is unique and always has been.

The unique components of The Nightmare Before Christmas make Burton’s move the classic he always wanted.  In my most recent viewing, I realized how many new things I pick up each time I see this movie.  The detail of the stop motion, the intricacies of the score, and the depth of the characters make Nightmare a fantastic film.  Definitely a must see for any Disney fan.

Contributed by: Ryan K. (NDD #137). Ryan is our resident film expert and creator of The Disney Film Project.