Betsy grew up moving around the eastern part of the U.S. Her first trip to WDW was as a baby in 1980. She returned for only a day each year until she moved to Florida in 1998. It was at that time she became a passholder and never looked back. Now she goes one to two times a month on average. Betsy loves listening to Disney music and watching movies when she's not stealing away to the parks. She has had the privilege of staying at each of the Disney resorts and is now trying to eat at each and every restaurant on property. One of Betsy's favorite things to do is share the magic of Disney with others by helping to plan trips. She especially loves introducing her goddaughter, Katie, to all things Disney. Betsy has been a guest blogger for Lou Mongello and enjoys keeping up with her own personal blog, Floridamingo.

The morning of the race came, and I was beyond nervous.  Race start time is 7am, but Disney wants you there (at the Transportation and Ticket Center in this case) between 5:45 and 6:15am.  To me this is a little excessive, but you’ve got to do what you’ve got to do.  Did I mention, I’m really not a morning person?  So I go to the valet stand at 5:30 after having called down for my car, and it isn’t there.  There really isn’t a whole lot of other traffic at this hour, no other cars, so I’m a bit perplexed and start to get nervous.  I see someone walking back from the valet parking lot with my keys and know this can’t be good.  Unfortunately, I’ve had issues with the valet before and should have thought about this before giving my car up to them again.  My bad.  The battery on my car was dead and there were no buses running to TTC at that hour since we were not staying at a host resort.  A kind and generous soul who was also going to the race offered to let us split a cab with her.  Had she not done that, I can pretty much guarantee there would have been blood on the saddle and blood on the ground where the valet was standing.

Once I finally got to the TTC and my blood pressure was through the roof, I needed to just walk around in the corral and calm down.  I knew the Be Our Guest Podcast crew was there to cheer people on. Also several of the Moms Panelists were running in the race, but I wanted to be alone.  I was not in a good place but needed to be because I was going to my happy place.  Before the race, Disney places characters (this time it was Mickey and Minnie in Halloween costumes) at the start line along with a DJ playing music to get the runners pumped up (think Black Eyed Peas and the like).  This helped distract me and my nerves and actually got me to a point where I calmed down.

Since I knew I wouldn’t be running the whole race, I decided to enter the corral with the walkers.  For the 5Ks, there is one large corral without dividers between the different pace groups (7-9 minute miles, 9-11, 11-13, 13 – 15 and then walkers at the back).  I didn’t want to get run over by people with longer legs or those who decided to actually run, so I figured this was at least a good place to start.  While waiting for the race to start, I took my time looking around at many of the runners dressed in costumes.  This is one of the most fun things about participating in a Disney race as opposed to any other race.  Due to the number of people, this put me about four minutes from the actual start line, so as I came to the line I started my watch so I would know how I was doing. 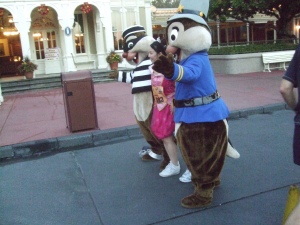 This is where my day got infinitely better.  My nerves disappeared.  I got to see sunrise over the Contemporary and the monorail line.  The music got my juices flowing as there was also a DJ  by the Contemporary after coming up the evil hill under the water bridge.  I decided I would run the first mile, then see what happened from there.  Mile one marker was about halfway down Main Street USA.  Before you even got there, you encountered volunteers and Cast Members along the race course cheering you on as well as your first set of characters.  Chip and Dale were out in costume in front of City Hall to pose with anyone who wanted to stop.  I had my camera with me and decided for my first race I would just take pictures as I passed by and later, if I could work my way up to it, I would allow myself to stop and wait in line (yes, there are lines) to get pictures with me and the characters.

One of the greatest things that kept me going during that race was when someone would read my name on my bib and shout out words of encouragement.  It may not seem like much, but that personalization made it feel like they were there just for me, and I sure didn’t want to let the down.  The other source of motivation was the slew of professional photographers around the course.  I certainly did not want them to take a picture of me walking, so any time I saw one, that put a little pep in my step. 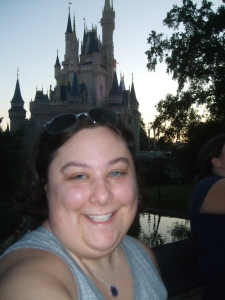 I did not run the entire race, but I did run the first mile without any trouble.  I opted to walk a land, jog a land (Adventure, Frontier, etc.) to conserve energy.  This plan actually worked pretty well for me as this was similar to how I had trained at home.  Throughout the Magic Kingdom characters were scattered, CMs cheered, and the cherry on the top of the cake was that they were cranking Halloween music.  I loved hearing Boo to You, and several other songs that are typically only played during the Halloween parade.  It made the race even more magical, and made me glad that I had chosen to run without an iPod for once.

The course was not too challenging, other than the evil hill, which was much worse the second time around when you’re hitting it shortly before mile 3.  Amazingly, I finished, upright and under my own power.  The time wasn’t my best, about a minute and a half over the 16 minute per mile”requirement,” but then I realized a few things:  1) I hadn’t been running outside since that first day of training back in July.  October in Florida is not exactly cool, even at seven in the morning.  2) I walked a bit more than I intended.  3) I didn’t train for hills on the treadmill, and there are a few little ones, or at least inclines, inside the MK, plus the aforementioned evil hill.  4) I took over 125 pictures during the course of the race.  Had I changed any of these elements, I know I would have finished well within the requirement.  This, in and of itself, was amazing to me.  Three months prior, I had not run in years, and here I was, at my favorite place on the planet, holding a finisher’s medal (okay rubbery plastic medal, but still). 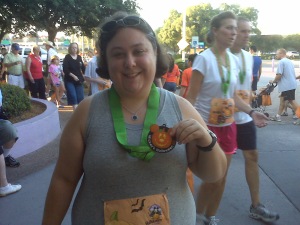 If any of you out there are thinking about running a race and are stuck on the couch, I encourage you to get up and get moving.  Here on the DDL site, you will find a link to a great training plan called Zero to Hero.  It can help guide you from completely sedentary to a runner, or jogger or walker.  Many are able to walk the entire race and still finish within the guidelines.  Please don’t let the time scare you.  If you need a buddy to help motivate you, there are tons of us here and on Twitter.  I just completed my second 5K a few weeks ago and beat my previous time by 45 seconds, in 42 degree cold weather.  I’m now registered for the next two races at Disney on back-to-back weekends in February and March.  It’s fun and gives you a unique way to see the parks when they are empty and while the sun is rising.  Come on and join the fun!

Contributed by: Betsy Bates (NDI#152) Betsy is the DDL Recreation Blogger. She is also the creator of Floridamingo.

RUNNERS JOIN TOGETHER TO BATTLE CANCER

PREPARING TO RUN MY FIRST 5K

EVERY GIRL IS A PRINCESS

3 thoughts on “MY FIRST DISNEY RACE”