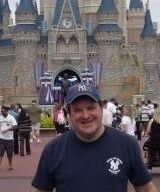 Words with Walt or Of Mouse and Man is a theatrical presentation written by Chris Lucas. “I play Walt Disney circa 1965 as he gets ready for the press conference announcing the ‘Florida Project.’ He re-caps his life story in an entertaining and moving way. Chris researched to find stories that most people have never heard about Walt or were not well aware of. “My goal is to have today’s generation realize that Walt Disney was a human being and not just a corporate icon. The show can be as short as 30 minutes, or as long as 2 hours, it varies by the group I’m speaking to. It’s currently on hiatus as I work on my father’s movie, but I will probably resume performances in Spring 2012.”

Chris is also busy writing ‘The Top 100 Top 10 of Disney’, a book featuring top 10 lists covering every aspect of the Disney Corporation from the films to the parks. “I’m in the process of re-writing and editing the book so that it will be updated through 2011.” The planned publication date is May of 2012.

The path to Chris’s pursuits were largely formed by his personal hero, his dad. “His story” said Chris “is one that would make Walt Disney himself say it sounds too made up or ‘Hollywood.’ In 1951, when Chris’s Dad was 12 watched the NY baseball Giants win the pennant in an exciting playoff game with a last inning dramatic home run. He was so happy to see his team win that he went out to play sandlot ball with the other kids. He was pitching and a ball came back to his face at 90 miles an hour and blinded him forever. When depression set in, Chris’s Grandmother wrote to his favorite players and they invited him to games to be their mascot and ball boy. Yankee Hall of Famer Phil Rizzuto took Dad under his wing and helped him through college. When my Dad graduated, Phil got him a job broadcasting with the Yankees, and he’s been doing it ever since.”

As if that wasn’t dramatic enough, when Chris was 2 and his brother was 4, their Mom left them and Chris’s dad had to raise the two young boys by himself. “He did an amazing job, but my Mother came back 10 years later seeking full custody. We were taken away from my Dad and he fought all the way to the NJ Supreme Court to overturn the ruling. He won, and in doing so became the first male in New Jersey to win custody from a female and the first disabled person in the United States to win full custody from a non-disabled spouse.”

Production begins next month on a feature film about Chris’s father starring Academy Award nominee Stanley Tucci, and a few other Oscar winners which are ‘under lid’ until the official announcement. No studio is set to distribute yet, but you can guess which one Chris is rooting for. 🙂

Sometimes when life has dealt some pretty challenging low moments it can also deliver some truly magical ones. “I think the magical moment when I knew I was on the right track was the day I got a personal handwritten note in response to a letter that I’d sent to Disney Legend Art Linkletter. Mr. Linkletter was perhaps Mr. Disney’s closest friend, and I told him about my pursuits. He was gracious enough to compliment me on my work, encourage me and to even tell me that my ‘can-do’ spirit reminded him of a young Walt Disney. I was beaming for months after reading (and re-reading) that letter. Mr. Linkletter and I kept in touch until his death, and he was always kind and helpful to me.”

Chris’s most ideal dream is to have the theatrical production ‘Of Mouse and Man’ open on Broadway, ideally with Chris in the role of Walt. “Even if it’s another actor I’d be thrilled to see Mr. Disney get his due on the Great White Way. As for my book, I hope to have it inspire conversations among Disney fans as to what their personal top ten lists are.”

Contributed by: Dean Rice (NDD#228) Dean is the DDL Dreamers Blogger. He is also the creator of Dreamers Empire.

CURLING UP WITH A GOOD BOOK

A LIZARD, A CATERPILLAR, AND A DUCHESS