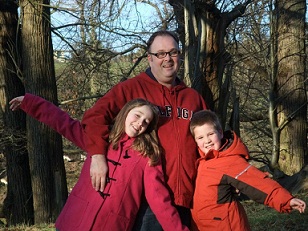 With a passion for Disney, what pursuits does Craig Duncan squeeze in between a full time job and family? How about working on ‘They Disney Brit’, the UKs largest and longest running Disney podcast, the ‘Destination Disney’ radio show and the ‘Eye on Orlando’ radio show both of which are aired live on Florida radio shows. Then there is ‘Mousemeets’ which is UKs Disney annual fan convention and ‘Mousemag’ a free bi-monthly magazine all about Disney written by the Disney Community for the Community. “We have also done something different with our associated web sites. We have made DisneyBrit.com one of the best sources for Disney related news anywhere in the world. EyeonOrlando.com is a pure Orlando holiday portal.”

Listeners of their shows know where the guys at ‘Just One Moon’ have their  priorities. “I am a big believer in family before work” says Craig “and always will, probably to the detriment of my career but not to my kids.”

Craig has found the magic of chasing his dream and including his kids. His 9 year old daughter and 7 year old son both adore Disney and even contribute to their dads shows. “In fact my daughter is working on her own Disney radio show!”

‘Just One Moon’ is the umbrella organization over all these efforts, and is made up of Adam, Juz and Craig, the guys teaming to bring us more Disney venue than just about anyone in the UK. And there’s more. “One exciting thing we have recently created is a social media site purely for Disney Fans called [disCOT.net]. It’s a site where people who share the love of Disney can interact, talk and communicate their Disney passions without non-Disney people saying ‘what?’ or ‘geek!’

Being a UK focused media company bumps up against some unique challenges. “The Brits are a nation of kickers. For some reason we get immense pleasure from putting others down and we have had a lot of that!” But the efforts have also yielded some magical returns for this family guy. “one moment that made me proud was when my 7 year old son worked on a school project. He had to do a 20 min presentation on a topic of his choice and he picked ‘My other life in Orlando.’ He wrote the presentation, prepared all the props and was really engrossed. I asked him if he liked this assignment and he said ‘Oh yes Daddy I love it!’ So I asked why so much? He said it was because ‘Disney was magic and when he grows up he wants to be the new DisneyBrit!’ That’s my boy!”

Craig was first exposed to Disney World in 1980 when as an 8 year old he visited the parks for the first time. “To see the things there that we had never even imagined before was amazing. Then in the 90s I fell in love with the Lion King and Beauty & the Beast films.” Today Disney offers Craig that escape from the ‘mad and sometimes sad world in which we live.’ “I have a complete release of emotion every time I walk down main street that any problems just fade away.”

With all these efforts, Craig’s dream is to have people look to them as the premium UK based source for Disney news and the worldwide source for Orlando news, views and opinions. “We would all love DisCOT to really take off. We have a great backer now and see big things for it.” Check out their sites at DisneyBrit.com Destination Disney Eye on Orlando Discot.com Facebook and Twitter.