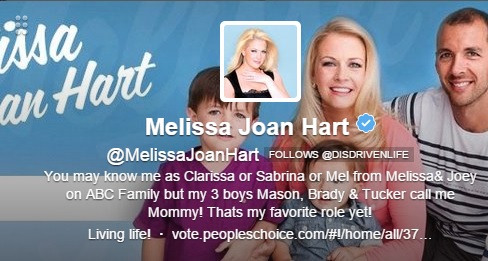 Did you know…Melissa Joan Hart follows the Disney Driven Life on Twitter? I know, I was so excited to see that SHE FOLLOWED THE DDL! She is obviously a Disney fan 🙂 And, yes, I did follow her back. She has a new holiday episode of her show airing on ABC Family on WEDNESDAY, December 10th! Don’t miss it! After all, Disney fans stick together! Now, if we could only get her counted as an neurotic Disney mom!

“Melissa & Joey” (8PM-8:30PM ET/PT) – In “A Melanie & Josiah Christmas” It’s Mel and Joe’s first Christmas as a couple, which leads to a competition over whose family ornament should take the prestigious top spot on the tree. To defend her ornament’s worthiness, Mel tells an elaborate tale about how the star came into her family over 100 years ago. Her great-great-grandmother Melanie was engaged to the town’s rich bachelor, Allistair, but her heart belonged to the lowly stable boy, Josiah. Trevor Donovan and Christopher Rich guest star.

Pop Up Santa Is Sweeping The Nation!