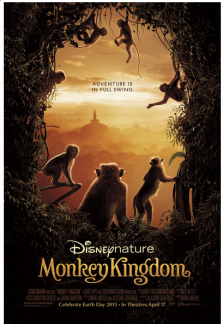 From Oscar, Sita, Scout, and the countless wild creatures we share this planet with, thank you! Disneynature is making a difference. With every ticket purchased for Disneynature’s Monkey Kingdom opening week (4/17 – 4/23), Disney will donate to benefit Conservation International to help benefit monkeys and other endangered species in their natural habitat.

Life is an adventure for Maya, the clever and resourceful blonde-bobbed monkey in “Monkey Kingdom,” Disneynature’s new feature film set among ancient ruins in the storied jungles of South Asia. Maya’s world is forever changed when she welcomes her son, Kip, into her complicated extended family. Like all families, Maya’s has more than its share of colorful personalities—and she’s determined to give her son a leg up in the world. When their longtime home at Castle Rock is taken over by powerful neighboring monkeys, Maya’s whole family retreats, and she uses her street smarts and ingenuity to uncover untapped resources amidst strange new creatures and unsettling surroundings. Ultimately, they will all have to work together to reclaim Castle Rock, where Maya can hopefully realize her dreams for her son’s future. Featuring a rich variety of characters, including a mischievous mongoose, simple-minded langur monkeys, predatory leopards and monitor lizards, “Monkey Kingdom” is narrated by Tina Fey (“30 Rock”), directed by Mark Linfield (“Chimpanzee,” “Earth”) and co-directed by Alastair Fothergill (“Chimpanzee,” “Bears”). With music from award-winning composer Harry Gregson-Williams (“The Chronicles of Narnia: The Lion, the Witch and the Wardrobe,” “Shrek” movies), Disneynature’s eighth True Life Adventure—the follow-up to 2014’s “Bears”—swings into theaters April 17, 2015.

Into The Woods – New Featurette

Cinderella – The Trailer Is Here!