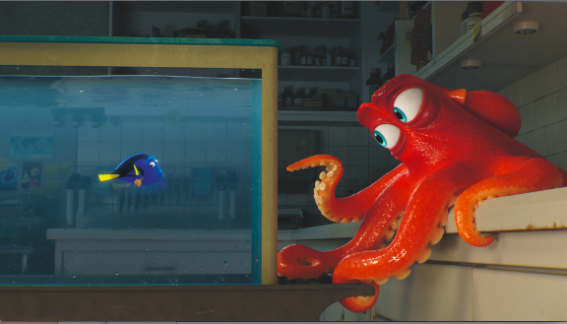 D23 Expo opened yesterday with a waterfall of news and fun adventures to look forward to, both in the parks and at home! Our contributor, NDD Don H. is there sharing amazing photos! Be sure to follow us on Instagram for great photos (@disdrivenlife). We will have a recap of Don’s adventures when he returns. For now, we are sharing all the official press releases from yesterday’s events. Enjoy!

Ellen DeGeneres (“The Ellen DeGeneres Show”), the voice of everyone’s favorite forgetful blue tang, took a dip with D23 EXPO attendees this afternoon, celebrating Disney·Pixar’s upcoming film “Finding Dory.” Joining DeGeneres on stage this afternoon were Ed O’Neill (“Modern Family”), who lends his voice to Hank, a cantankerous octopus; Ty Burrell (“Modern Family”), the voice of Bailey, a misguided beluga whale; and Kaitlin Olson (“Always Sunny in Philadelphia”), who voices Destiny, a kind-hearted whale shark. Oscar®-winning director Andrew Stanton (“Finding Nemo,” “WALL•E”), co-director Angus MacLane and producer Lindsey Collins (co-producer “WALL•E”) offered new details of the all-new story, which reunites Dory with friends Nemo and Marlin on a search for answers about her past. What can she remember? Who are her parents? And where did she learn to speak Whale? Also featuring the voices of Albert Brooks, Diane Keaton and Eugene Levy, Disney·Pixar’s “Finding Dory” swims into theaters June 17, 2016.

Said Stanton, “In ‘Finding Dory,’ we can expect to address the one emotionally open-ended issue that remained from the first movie: Where is Dory’s family, and will this overly-optimistic fish with short-term memory loss ever be able to find them again? Her issue has also given us the opportunity to travel to very different locations, on land and sea, and meet a variety of new sea creatures that expand the world of Nemo, Marlin and Dory.”

Do I know you?