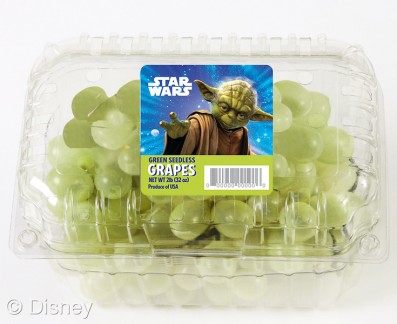 Glendale, Calif.  –Disney Consumer Products (DCP) brings the power of the Force to the produce aisle, unveiling new healthy Star Wars branded fruit and veggie offerings to celebrate the addition of Lucasfilm to The Walt Disney Company’s Healthy Living Commitment. Just in time for the December release of Star Wars: The Force Awakens, families can enjoy Star Wars-themed bagged apples by Sage, citrus fruit by Dayka Hackett, carrots by Kern Ridge and grapes with Yoda-themed packaging by Four Star, which all meet nutritional guidelines put in place by The Walt Disney Company. A sampling of the new product line will be revealed at the PMA Fresh Summit Convention & Expo October 23-25 in Atlanta, Georgia (Booth #5129).

John T. King, vice president of licensing, consumables, Disney Consumer Products comments, “Supporting parents by offering healthy, nutritious options for their kids is of utmost importance to The Walt Disney Company and adding family-favorite Star Wars to our licensed fruit and veggies portfolio is a natural extension of our commitment in this space.”

Additional new licensed produce featuring designs from Marvel’s Avengers and Disney’s Frozen will be featured at PMA including Marvel and Frozen-themed Grapes by Four Star and Frozen-themed Dipperz by Crunch Pak, which are available now at grocery stores nationwide. Through newcollaborations with DCP, licensees and retailers have seen their produce businesses thrive. For example, both DCP’s summer grapes program at Walmart and creative in-store fruit displays at Albertson’s performed extremely well, exceeding sell-through expectations.

More than 4.3 billion servings of Disney and Marvel-branded fruits and vegetables have been served in North America since DCP began tracking in 2006. More than 4.5 million pounds of apples, bananas and grapes are eaten at The Walt Disney Company’s U.S. parks each year, and over 55 million servings of fruits and vegetables have been distributed through a partnership with Feeding America.

The Walt Disney Company’s commitment to building healthier generations began nearly ten years ago and stemmed from a growing societal concern over children’s health and the belief that The Walt Disney Company could make a real difference. In 2006, The Walt Disney Company became the first major media company to establish formal Nutrition Guidelines and has marked every year of its Commitment with significant milestones such as expanding content and experiences to inspire healthier food, physical activity and hygiene choices, and becoming the first major media company to launch food advertising standards for kids and the introduction of the Mickey Check. The Mickey Check is a quick and easy way for families to identify healthier food options in stores, on-air, on-line, at Disney theme parks and other places where Disney products are sold. Foods and recipes that feature the Mickey Check adhere to stringent standards and meet Disney Nutrition Guidelines, which are continually updated to remain best in class. To learn more about The Walt Disney Company’s Healthy Living Commitment and the Mickey Check, visit Disney.com\BeYourBest.

Disney’s PLAYMATION: A New Way for Families to Play!