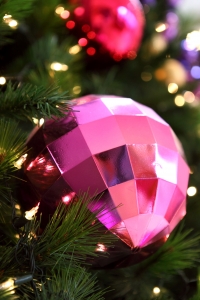 Growing up inn the suburbs of Washington, D.C., Aleisha has never let distance stop her from enjoying Walt Disney World vacations. From an early age, whether it be on a family vacation or tagging along with a friend on her vacation, she fell in love with the magic and the joy that Disney brought. Now making her own memories as a DVC member with a Star Wars obsessed little boy, she tries to capture the same magical feelings into every day life. She has quickly established a reputation with friends, relatives and coworkers as a real-life Belle. Always with a book in her hand and available to help others plan their magical Disney vacations. Beyond Disney, Aleisha is a lover of all genres of music; craves a good concert from time to time, considers her food allergies a blessing rather than a curse and can be seen at the good old hockey game during the NHL season.

Growing up, Christmas was one of the highlights of the year. Yes, there were presents, and days off of school but there was another family event that soon became a tradition. Every year, after the gifts were opened, after my mother had her morning coffee and after my father made us Christmas breakfast, we would flip on the television and watch what was back then The Walt Disney World Very Merry Christmas Parade. Now it is better known as the Disney Parks Christmas Parade. Regardless of the name, every year we would sit and watch and dream about a Walt Disney World vacation. And every year my mom would inevitably say with tears in her eyes, “one year, one year we will go there for Christmas.” Back then we would laugh at how emotional she would get. I don’t think we really got it. Instead we would marvel at the attractions, the entertainers, the floats on Main Street U.S.A., and believe in childhood dreams even years after childhood dreams are outgrown.  Still no matter how old we got, we still watched the parade. There was just something magical about watching it, as though we were right there in the mix of everything. Who needed to be in the center of the action! I have passed the same tradition down to my own children. Every Christmas, after everything is all said and done, I sit them down and we watch the Disney Parks Christmas Parade. And even if we go once a year, and have seen the parades, the sites and the attractions more than I can count, there is something about watching it on TV, during the most magical time of year with both of my kids that makes me realize I have become my mom, tears and all. I get it. I truly get it now.

The other tradition is something many families do as well.  Every year we pick out a Disney themed ornament for our Christmas tree. It started back on our honeymoon, when we got the Just Married ornament down at Walt Disney World, and continued each year. Most of the time, they were the giant ones you could buy at Disney’s Days of Christmas at Disney Springs.  When our son came along, we included one for him. While we still grab one each year from Walt Disney World, we have also expanded our collection to include ones your can pick up at your local Hallmark store. Like most, we have our son pick out one of his own, usually it is of the Star Wars themed, but occasionally he will pick out a Mickey or Belle as it reminds him of me.  One of my favorite things about picking out these special ornaments is the conversations it starts between family and friends.  I love the special memories each one of them holds, whether it’s remembering our honeymoon when we pulled an all-nighter in the parks, or the birthday when we surprised a little boy with his own Jedi package, each serve great reminders of how far we have come.  And every year I look forward to seeing just what we will hang on the tree this year.

So what is your favorite Disney inspired holiday tradition? Is it anything like mine or do you have different ones? I would love to know!

My Son, Oswald and the Holidays – Holiday Traditions

One thought on “Disney Holiday Traditions”