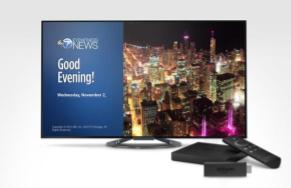 The ABC Owned station group Amazon Fire TV apps deliver local news, weather and community news, including an evening video digest with all the major news from the day, a “Feel Good” section that features upbeat, inspiring stories and a weather section that displays the seven-day weather forecast, as well as the latest weather-related video clips.

The Freeform and ABC apps are services that allow viewers to stream such popular shows as “Pretty Little Liars” (Freeform), “Shadowhunters” (Freeform), “The Fosters” (Freeform), “Designated Survivor” (ABC), “Modern Family” (ABC), and “The Bachelor” (ABC) live and on-demand on their desktop, mobile and connected TV devices.

Freeform viewers who sign-in with a pay TV service can watch a 24-hour live stream and have next-day access to shows right after they air. The Amazon Fire TV app is live in time for viewers to see the much-anticipated premiere event for its new one-hour drama “Beyond.” In a network first, Freeform is making 10 episodes available on its digital platforms with the two-hour television premiere event on Monday, January 2, 2017.

ABC’s viewers who sign in also have next-day access to shows, and those in ABC owned station and Hearst affiliate markets can watch the 24-hour live stream.

Disney|ABC Television Group has been a pioneer in bringing its programming experiences to new platforms.  Its network – ABC, Freeform, and Disney Channel – streaming apps were among the first to launch on iOS devices and are now on all major platforms. The OTV stations each have mobile apps that deliver local news.

Sir Elton John to Perform on “THE WONDERFUL WORLD OF DISNEY: DISNEYLAND 60”