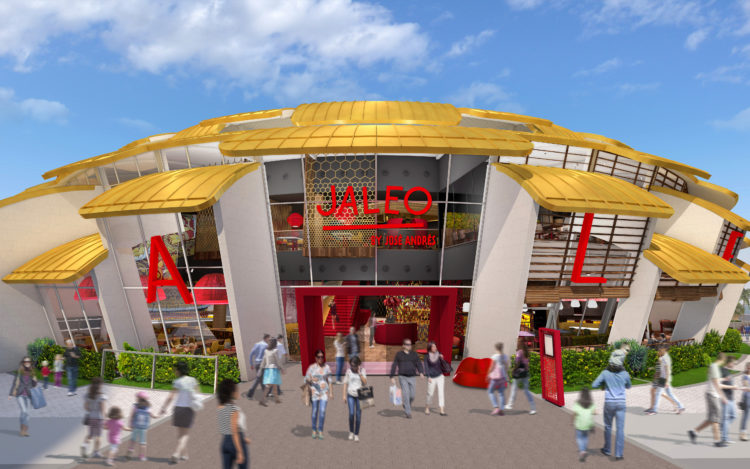 José Andrés’ ThinkFoodGroup is proud to announce that its beloved Jaleo brand will open a new location at Disney Springs, bringing the spirit and flavors of Spain to the Walt Disney World Resort in Lake Buena Vista, Florida and creating 280 new jobs. As the pioneering brand that popularized tapas dining in the U.S., Jaleo at Disney Springs — opening March 17— will be the fifth Jaleo location in the U.S., the first in Florida and the largest location to date.

First opened in Washington, D.C., in 1993, Jaleo represents the very best of Spanish cuisine and design, seen through the creative lens of Spanish Chef Andrés and his team. Jaleo offers an unparalleled tapas experience in a lively setting befitting its name, which means “revelry.”

Jaleo at Disney Springs will feature an extensive menu of tapas reflecting the rich regional diversity of traditional and contemporary Spanish cuisine, as well as sangrias and a premier selection of Spanish wines. Highlights include a variety of authentic paellas cooked over a wood-fired paella pit, Spanish specialties like hand-carved Jamon Iberico de Bellota and wood-grilled Iberico pork, and signature dishes like Gambas al ajillo, shrimp sautéed with garlic and chili, and Pollo Croquetas, classic Spanish chicken fritters.

On the restaurant’s front corner adjacent to the Jaleo entrance will be Pepe by José Andrés, the first brick and mortar location of the chef’s wildly popular Spanish food truck, which has been a D.C. fixture for more than six years. Pepe by José Andrés will offer a diverse menu of Spanish sandwiches, or bocatas, both hot and cold, as well as gazpacho and salads to go. The quick-service location will also sell delicious Spanish sangria, complete with sangria ice cubes to prevent any dilution of the drink in the Florida climate.

Designed by renowned Spanish designer Juli Capella, the architectural form of the building housing both Jaleo and Pepe is inspired by the bold, playful nature of Spain featuring petals that organically open, inviting guests to enter and experience the very best of Spanish cuisine. The petals themselves form pergolas, which extend toward the outdoors, allowing light to flow in and out.