Disney Channel Orders 2nd Season of ‘Sydney to the Max’ 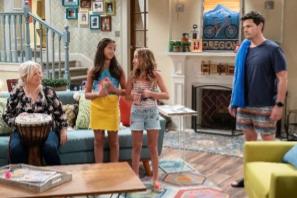 Disney Channel has picked up a second season of the popular live-action daughter/father comedy “Sydney to the Max,” starring 13-year-old actress/musical artist Ruth Righi in the title role of Sydney. Geared for kids ages 6-14 and families, the series is set in the present day with flashbacks to the 1990s and follows outgoing middle schooler Sydney Reynolds, who lives with her single dad Max (Ian Reed Kesler, “Suits”), in the house he grew up in, along with her progressive grandmother Judy (Caroline Rhea, “Sabrina the Teenage Witch,” Disney’s “Phineas and Ferb”). As Sydney’s preteen pursuits begin to expand, Max’s flashbacks of his childhood help him gain a better perspective of his daughter’s experiences. Created and executive produced by Mark Reisman (“Frasier,” “Wings,” “The Exes”), production on season two will commence later this summer.

“Mark Reisman and his team of talented writers, along with the top-notch cast, delivered a show that has quickly become an audience favorite for Disney Channel,” said Nancy Kanter, executive vice president, Content and Creative, Disney Channels Worldwide. “With its playful nod to growing up in the 90s, the series strikes a chord with anyone who’s ever experienced their own ‘growing pains.’ We look forward to having our viewers see what’s in store for the Reynolds family next season.”

GAMER’S GUIDE TO PRETTY MUCH EVERYTHING Set to Premiere July 22, 2015

“Descendants: Set It Off” NEW Special to Air on Disney Channel TONIGHT (8/9/15)

‘Sydney to the Max’ Set to Premiere in January