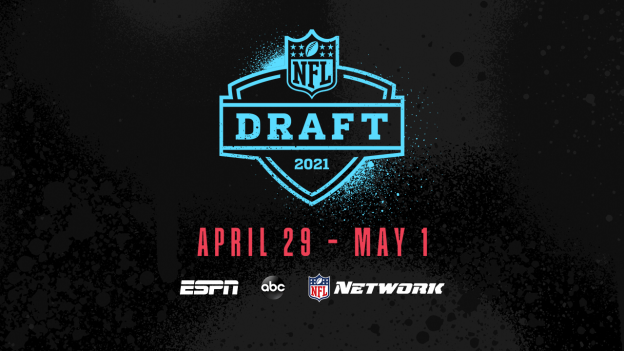 The Walt Disney Company will kick off its presentation of the 2021 NFL Draft on Thursday, April 29, at 8 p.m. EDT / 5 p.m. PDT on ESPN, ABC, ESPN Deportes, ESPN Radio and the ESPN App. Coverage will include 1,500 creative elements, 450 player highlight packages and 35 player vignettes. ESPN and ABC will document the three-day event with 50 cameras and more than 50 microphones following live action in Cleveland, more than 40 additional cameras at the homes of Draft prospects and another 32 cameras offering looks into each NFL Draft room.

On ABC, Rece Davis will host primetime broadcasts in Cleveland on April 29 and 30 with college football analysts Kirk Herbstreit and Desmond Howard and senior NFL Draft analyst Todd McShay. From a nearby set, Maria Taylor will host with college football analysts Jesse Palmer and David Pollack. Taylor will also interview the family members of NFL draftees. Leveraging valuable insights from the eleven-time Sports Emmy® Award-winning “College GameDay Built by The Home Depot” crew, ABC will offer player-focused coverage, giving insight to storylines on and off the field.

In addition to airing live on ESPN, ABC, ESPN Deportes, ESPN Radio and the ESPN App, the 2021 NFL Draft will be televised on NFL Network presented by Verizon and streamed live through NFL digital properties. “SportsNation”’s NFL Draft Digital Show will also stream live Rounds 1-3. Further, ESPN will surround the three-day event with coverage across all platforms and countdown to Round 1 with a 26-hour “Draft Marathon” across ESPN, ESPN2 and ESPNEWS.

SportsNation NFL Draft Digital Show Streaming Live across the ESPN App, Twitter, Facebook, YouTube, and – in an ESPN first – TikTok
This year, ESPN’s live digital show for the NFL Draft will be anchored by “SportsNation” on Thursday and Friday and accessible across the ESPN App, Twitter, Facebook, YouTube, and – for the first time for an ESPN studio production – TikTok. As fans have come to expect from the “SportsNation” brand, the show will focus on reactions and engagement from fans both on site in Cleveland and across social media.

Ashley Brewer, Treavor Scales, and Mike Golic, Jr. will host from the main set in Bristol, Conn., and will be joined by a lineup of ESPN’s digital commentators including Mina Kimes and Harry Lyles as well as instant analysis from Matthew Berry, Jason Fitz and Field Yates. Together, they will deliver pick-by-pick coverage through the fans’ perspective with off-stage moments that will complement the viewing experience to the main telecast. The show will also feature first round reaction from “First Take” commentators Stephen A. Smith and Max Kellerman and player vignettes from “SportsCenter” anchor Kevin Negandhi. Additionally, it will create real-time video highlights and moments for the ESPN App, YouTube, and across social platforms.

A multicast show with ESPN Radio will be live streamed for Saturday’s coverage featuring Golic Jr., Scales and Yates.

More Pre- and Post-Draft Coverage on “SportsCenter”
“SportsCenter with Scott Van Pelt” will air at 11:30 p.m. EDT on ESPN following primetime presentations of the Draft with more reaction, analysis and interviews. Leading up to the Draft, editions of “SportsCenter” will air related content including a series narrated by anchor Kevin Negandhi that explores the Draft needs of the Jets, Dolphins, Patriots, 49ers and more, as well as a virtual reality series with analyst Dan Orlovsky breaking down the top five quarterbacks. “SportsCenter” also will air Draft-related excerpts from other ESPN shows including “Hey Rookie,” “Detail: Tebow,” “QB21 with Kirk Herbstreit” and a series of vignettes on Draft prospects.

ACC Network Draft Preview Leads Into Round 1
ACC Network will air an hourlong “The Huddle: Draft Preview” on April 29 at 6 p.m. EDT. Host Kelsey Riggs along with ACCN college football analysts Eric Mac Lain and EJ Manuel will break down what will make players successful at the next level. The show will also cover player arrivals and interviews leading into ESPN and ABC’s NFL Draft coverage.

“First Take” “Draft Blitz,” Round-by-Round Recaps and Special Guests
Every day leading up to the start of the 2021 NFL Draft, ESPN’s popular morning debate show “First Take” – featuring Stephen A. Smith, Max Kellerman and host Molly Qerim Rose – will continue its “Draft Blitz” segments where the trio breaks down one team’s needs, goals, options and much more. In addition, “First Take” will preview the overall Draft before the start of Round 1 with a special edition on April 29 as well as recap each round with must-watch perspective the following morning with a full lineup of special guests.

“Daily Wager”
ESPN’s daily sports betting news and information program “Daily Wager” will have NFL Draft content every day leading up to the Draft, including discussing Draft prop bets for every team in the league. “Daily Wager” will dedicate almost all of the April 28 show to Draft content, airing from 6-7 p.m. EDT on ESPN2. The weekday show will air at an earlier time April 29-30 (4 p.m. EDT, ESPN2).

ESPN+
Leading up to, during and following the NFL Draft, ESPN+ is providing fans with distinctive analysis and insights from ESPN Draft analysts and ESPN NFL Insiders, including a series of preview specials, new episodes of “Detail” and “The Fantasy Show with Matthew Berry” and premium articles on ESPN.com and the ESPN App. Details.

The Undefeated
ESPN’s multiplatform content initiative exploring the intersection of sports, race and culture will offer comprehensive coverage of the 2021 NFL Draft via features, HBCU highlights and vignettes. Highlights include Martenzie Johnson examines how race plays a part in Justin Fields’ and other Black quarterbacks’ evaluations; Domonique Foxworth looks back 10 years on how cornerback Richard Sherman fell to the fifth round and the Seahawks “Legion of Boom” came to be; Branson Wright explains what drives Justin Hilliard, an NFL Draft prospect who played six years at The Ohio State University while dealing with injuries that could have ended his collegiate career; and David Steele interviews University of Missouri football players Joshua Bledsoe, Tyree Gillespie and Larry Roundtree on how their bond in Omega Psi Phi Fraternity, Inc., strengthens them to be the best men on and off the field.

Additionally, the HBCU features focus on the top prospects from Historically Black Colleges and Universities who have a chance at playing in the NFL, such as Alabama A&M quarterback Aqeel Glass; Florida A&M’s offensive linemen Calvin Ashley; former Hampton University and Florida State University quarterback Deondre Francois; and North Carolina Central University’s defensive back Bryan Mills. Video stories from Bill Rhoden spotlight the 19 players from HBCUs inducted into the Hall of Fame; how the Pittsburgh Steelers dynasty of the ‘70s was built on the foundation of drafting a league-high 24 players from HBCUs; and a profile of recent HBCU draftees who became NFL Pro Bowl players.

ESPN.com and ESPNDeportes.com
ESPN.com’s coverage of the 2021 NFL Draft will focus on signature voices Mel Kiper Jr., Todd McShay, Louis Riddick, Kirk Herbstreit and others. Highlights include NFL Mock Drafts paired with “SportsCenter Specials,” pros and cons on every first-round Draft pick from NFL Nation, plus Draft Day analysis from NFL Nation on every draft pick and real-time data via DraftCast. Following the 2021 NFL Draft, ESPN will release Kiper’s Draft Grades (the foundation for “SportsCenter Special: Draft Grades” on May 4) and “Early Impact” Rookies (May 4) as well as McShay’s best picks for all 32 teams (May 1). Additionally, McShay will look ahead to next year with a Way-Too-Early 2022 Mock Draft on May 6, Kiper will unveil his Way-Too-Early 2022 Big Board on May 11, and NFL Nation will break down the biggest post-draft questions for all 32 teams on May 12. In addition, ESPNDeportes.com will have a team dedicated to covering the Draft, providing pre-Draft analysis, pieces written by Sebastian Martinez-Christensen and videos of every selection.

By the Numbers: 2015 Star Wars Half Marathon Weekend